Reviewed by Barbara Bamberger Scott
May 9, 2013 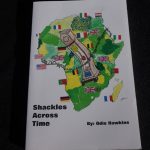 “Grandfather Odie…stabbed his cane at trader Quartey’s testicles, his heart, his head, and pronounced a curse…that would affect future generations of Quartey’s descendants.” This curse, made in Ghana in the dark days of the African slave trade, is the first link in Shackles Across Time.

Odie Hawkins, a prolific writer in what he calls the “Pan African Occult” genre, has created his new novel in that vein. Shackles Across Time is a story about three African-American families, descendants of slave trader Quartey, who want to determine if they are victims of the centuries-old Ghanaian curse. The families, generally blessed with intelligence and success, share a common tragedy. The third child of each couple is stricken with a disability: a physically deformed son, a schizophrenic daughter, and a daughter afflicted with nymphomania.

Gathering in an unusual “reunion,” the families convince Chester Simmons, a best-selling author who has mentioned the curse in his latest novel, to investigate its possible validity. Impressed by their desperation, their determination, and a hefty payment, Simmons goes to Ghana to explore the family histories; there he finds that he is inextricably linked to the curse. To lift the spell, an African bokor (sorcerer), will test Simmons to his mental and physical limits.

Hawkins story has verve and originality, and the cover, with its symbolic map of Africa decked in Pan-African colors, is refreshingly non-formulaic. Centering on the curse and its resolution, the book’s plot is intriguing and carefully devised, and the ending satisfies.

Hawkins’s book is clearly targeted to his established fan base. It could make an above-average screenplay or television miniseries because it peripherally examines larger issues: the cruelty of the slave trade, the ensuing racial memory of oppression, and the connection of black Americans to their African heritage. Shackles Across Time cries out for more judicious editing and more thoughtful character development.

Disclosure: This article is not an endorsement, but a review. Foreword Reviews and Clarion Reviews make no guarantee that the author will receive a positive review. Foreword Magazine, Inc. is disclosing this in accordance with the Federal Trade Commission’s 16 CFR, Part 255.